Print
The Bridge of Reparation was a concept I learned from Joann Schladale, MS LMFT to help youth get over their shame.  Some of the youth that I have worked with have almost given themselves PTSD from the shame of their own behavior.  They are not traumatized in the same way as someone who is physically or sexually hurt, but some youth have flashbacks, triggers, bothersome physical symptoms, cognitive distortions, avoidance of the issue and behavioral problems.

One last thing, having appropriate amounts of guilt for the wrong doing is healthy and necessary for moral development,  so don’t forget to talk about the difference between shame and guilt. 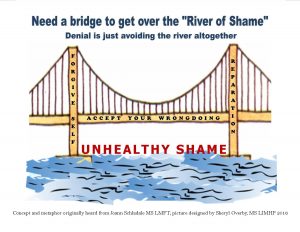